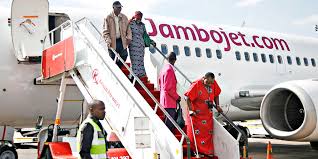 Jambojet, a subsidiary of Kenya Airways, has begun ferrying cargo on its passenger flights, raising the level of competition among local and foreign airlines, each targeting a piece of the lucrative pie.

With six aircrafts each with a capacity of carrying 1.2 tonnes of cargo, Jambojet has a cargo capacity of approximately 169 tonnes per week.A low-cost carrier, Jambojet said the cargo operations are on its passenger aircrafts. 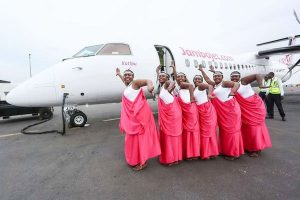 In early 2022, the airline received regulatory approvals from the Kenya Civil Aviation Authority (KCAA) to start ferrying cargo across local and regional markets where it operates.

Its cargo operations targets both local and regional routes such as Goma in the Eastern Democratic Republic of Congo.

“Jambojet has a fleet of 6 De Havilland Canada Dash 8 Q-400, and operates an average of 280 flights weekly across the network. Each flight has a cargo hold capacity of 1.2tonne, most of which flies empty. With the introduction of cargo operations, we can seamlessly connect the Coastal destinations rich in fish and seafood to Nairobi,” said Karanja Ndegwa, Jambojet MD and CEO.

According to Titus Obbogi, its Sales and Distribution Manager, the airline intends to promote trade links between Goma, Eastern DRC Congo and Kenya, connecting the Coast to Nairobi and to international markets and promoting passengers and cargo throughout the region.

The airline has also signed agreements with other airlines such as Kenya Airways and Astral Aviation to allow for seamless connection of cargo from local destinations to international markets.

The local carrier began flights from Nairobi to Goma in the Democratic Republic of the Congo in September 2021, becoming the first low-cost carrier to fly the route. It is also the only direct flight between Nairobi and the Eastern DRC city.

The airline started with 2 frequencies weekly, which have since grown to 3.

This came after the signing of a four-part bilateral agreement between the Government of Kenya and that of the DRC covering investment, and policy development in several economic sectors including tourism and infrastructure.

In the seven years of operation, the airline has expanded its fleet to 6 brand new De Havilland Dash 8-400, and flown over 4.5 million passengers.

“What Jambojet has achieved with the commencement of these cargo operations to Goma in the DRC is such an astute example of a company sensing market dynamics, and adjusting strategy to adapt positively to new demands,” said Ms Betty Maina, Cabinet Secretary for Industrialization, Trade and Enterprise Development in a statement.

In a bid to diversify its product offering and complement its scheduled operations, Jambojet launched Charter services in October 2020 which allows one to charter a Jambojet aircraft to various destinations.

Since its inception in 2014, Jambojet, which is IOSA certified (IATA Operational Safety Audit registration), has achieved undeniable business growth with a fleet of 6 brand new De Havilland Dash 8-400 and flown over 4.7 million passengers across all its destinations.