Astral Aviation is a cargo airline based in Nairobi, Kenya. It was established in November 2000 and started operations in January 2001.[PhotoCredit/Astral Aviation}

Astral Aviation has received the nod to operate direct cargo flights to Israel, after acquiring a second freighter from the US ahead of the peak season for horticulture exports.

This development makes the airline the second largest cargo operator in Africa after Ethiopian Airlines.

The cargo carrier received the Boeing 757 last month and has been issued permission by the air authorities in both Kenya and Israel to operate cargo on the Nairobi-Tel Aviv route. 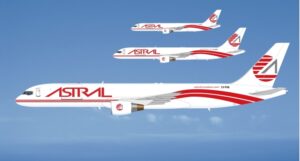 This is the second high-capacity freighter that the carrier has received in the last two years and will see it expand to more routes, including Riyadh.

“With the new aircraft, we shall be operating from our Nairobi hub to Tel Aviv, Riyadh, and Istanbul for perishable exports from Kenya to the new markets that are currently under-served, hence the opportunity to air-lift flowers, vegetables, fruit, and meat to these destinations,” said Astral Aviation chief executive officer Sanjeev Gadhia.

Although Kenya’s Jomo Kenyatta International Airport (JKIA) is the leading export airport in Africa, Kenya still suffers from a shortage of freighters with a weekly capacity of about 4,500 tonnes against the required 5,500 tonnes.

The Israel market requires at least 40 tonnes of horticulture produce every week and currently, there are no direct flights between Nairobi and Tel Aviv.

Astral Aviation is a cargo airline based in Nairobi, Kenya. It was established in November 2000 and started operations in January 2001. It operates scheduled and non-scheduled/ad hoc cargo charters to regional destinations in Africa and to Liege in Belgium. Its main base is Jomo Kenyatta International Airport, Nairobi.