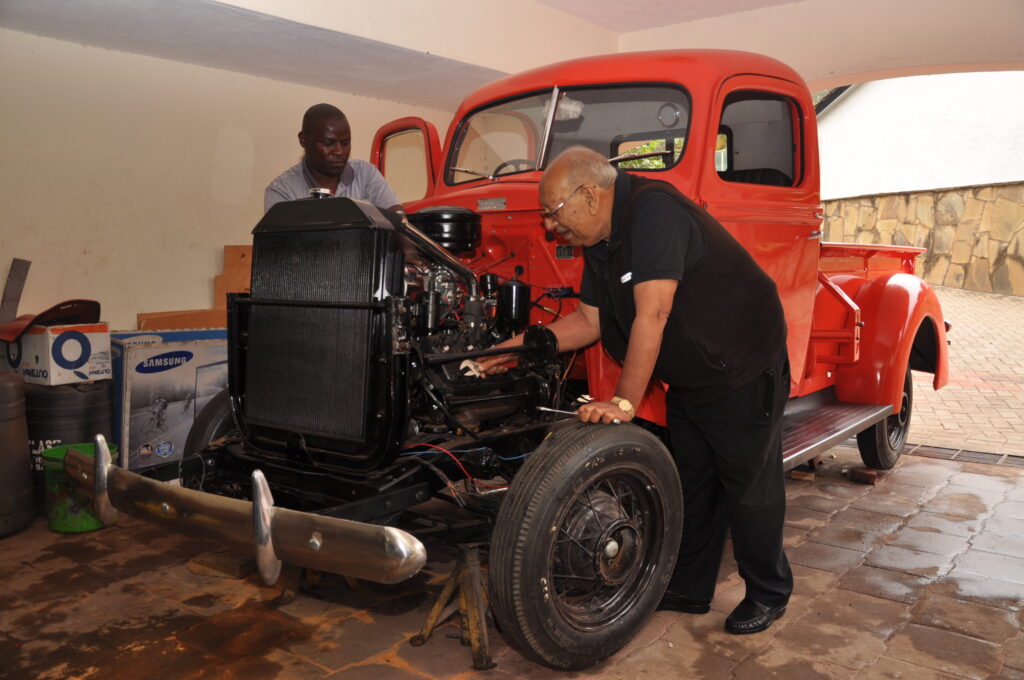 1947 Ford pickup: Anwar Fatehdin (right) and his mechanic Haniel Kivuti (left) work on the V8 engine of his 1947 Ford pickup which will be competing in the utility class in this year’s Golden Africa Concours d’Elegance on September 25th at the Nairobi Racecourse[Photo/Bob Dewar PR Agency/Concours D'Elegance]

The 2022 Golden Africa Concours d’Elegance has attracted a star studded entry including competitors from outside Kenya. This year’s Concours is the 50 th and marks the Golden Jubilee of the annual series organized by the Alfa Romeo Owners Club.

It will be held at the Nairobi Racecourse on Sunday (September 25 th ) from 9:00 a.m. Spectators will be treated to a pageant of motoring history starting with the 1925 Triumph motorcycle entered by Dominque Antoine. Sati Jabbal will also be defending his title with his 1925 DKW which was the highest placed bike in the last Concours. These two ancient bikes will be judged in the class for motorcycles made in 1970, or earlier which includes Russell Hughes
1952 Ducati 65T and Peter Giraudo’s 1959 BSA Shooting Star.

A rare Lancia Delta Integrale prepared by Navraaj Singh Hans, an enthusiast from Tanzania is an attention grabbing entry in the class for rally and racing cars. This will give competition for the 1967 Alfa Romeo GTA of Gilgil based Fergus Robley and Aslam Khan’s 1968 Porsche 911 both of which are regular cars in the event.

The 1968 Jaguar of Kevit Desai who is the Patron of the annual Concours d’Elegance will compete in the class for cars over 3,000cc against the 1952 Rolls Royce limousine of Roger Tanner, Kevin Moracha’s 1980 Mercedes Benz W126 and the 1965 Jaguar E-type of Alec Davis.Amandeep Kaur Lotay will be tackling the classiest event in the motorsport calendar for the first time with two car entries, a Citroen and a Mercedes Ponton both made in 1955. Anwar Fatehdin is contesting the event for the second time with a 1929 Ford Model A and is one of the
participants in the class for “golden oldies” together with the 1928 Austin 7 of Paras Shah which
is the oldest car in this year’s Concours.

The process of judging cars starts on the Total Quartz inspection ramp and continues along the judging line with assessments for the external finish, the interior and boot, external finish, the engine and a safety check.
Motorcycle fans will be flocking to the motorcycle judging ring to watch the strong field of big bikes led by Enzo Amato’s 2002 Honda Goldwing with an 1800cc engine followed by Prateek Sing Gulati’s 1700cc Yamaha Roadstar made in 2001.

These bikes will be competing the class for Street Motorcycles over 1300cc together with Tumaini Muthiga’s Harley Davidson and the 1991 Honda Goldwing entered by Doc Badman Classics from Kisumu.
A strong force of 20 Uganda Bikers will be at the Nairobi Racecourse on September 25 th with their massive motorcycles. These bikers ride their motorcycles from Uganda to attend the event and are a favourite with the crowds. Angellah Ssemukutu 2013 Suzuki GSXR, Paul Kiddu’s 2009 Ducati Maltrada and Gianfranco Masetto’s Honda Varadero made in 2000 are among the bikes to look out for.