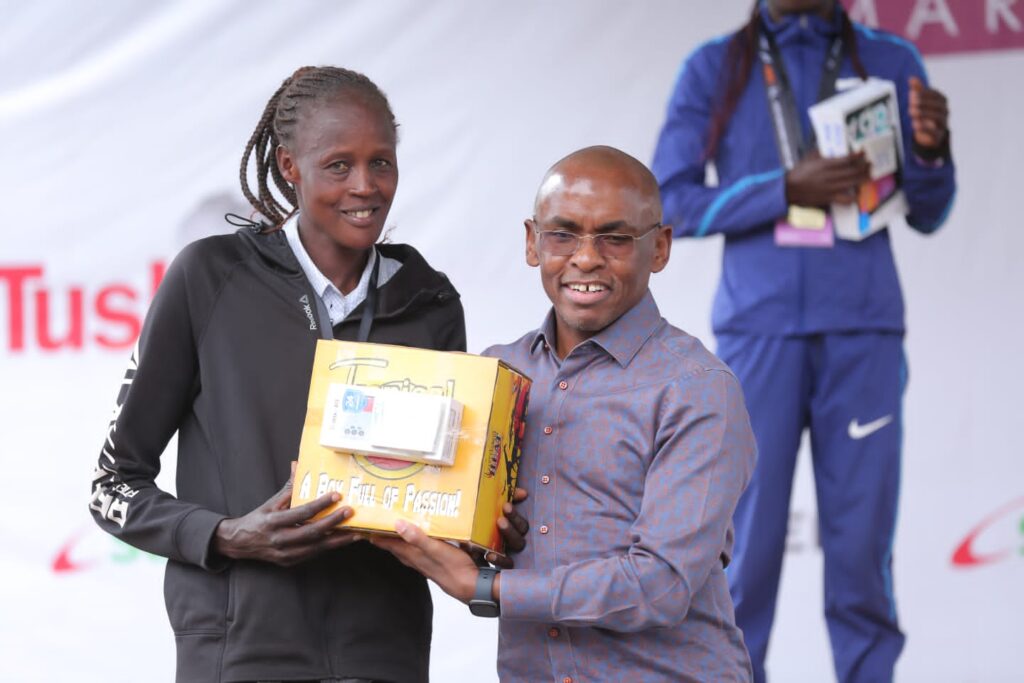 The annual Lewa Marathon comprises the 42km race, half marathon and the Children’s event and draws participants from all over the globe with the marathon course running through one of Africa’s most breathtaking wildlife conservancies.[Photo/Oxygene P.R Agency]

Peter Wahome and Fridah Chepkite emerged winners of the grueling 42km 2022 Lewa Safari Marathon held at the Lewa conservancy last Saturday. Wahome braced the hot weather to finish first in a time of 2: 24: 45 ahead of Philip Kigen who finished second with Paul Waweru coming in third.

“Allow me to thank the organizers of this event for making it successful. I am glad that we got an opportunity to participate in the physical run. The competition was tough, but I emerged victorious given that I usually train in such terrain,” said Wahome.

Fridah Chepkite won the women’s race in 3:02:04 ahead of Beatrice Cherop and Anika Berlin who finished in second and third positions respectively.

“It is fantastic to see everyone enjoying themselves with over two hundred kids including juniors from M-PESA Foundation Academy in this year’s Lewa Safari Marathon. For the last 22 years the marathon has allowed everyone to experience something very different; to run in the wild and contribute in supporting the community. We have achieved all this over the period through sponsorship and participation by various stakeholders,” said Peter Ndegwa, CEO Safaricom

“We are the biggest supporter of Kenyans in terms of social and also lifestyle. We have a passion for sports, environmental conservation and also community investment. And that is why as Safaricom, we have been involved in this event from its inception”, he added.

Elsewhere, Safaricom CEO Peter Ndegwa emerged the winner in the ‘10km executive run’ category, while Clinton Lemashon and Mercy Jekemboi both from the M-PESA Foundation Academy emerged the winners in the junior 5km category.

The annual Lewa Marathon comprises the 42km race, half marathon and the Children’s event and draws participants from all over the globe with the marathon course running through one of Africa’s most breathtaking wildlife conservancies.

As lead co-sponsors, Safaricom and Huawei have continued to partner to support the marathon. This year, other event sponsors included Kenya Breweries Limited as well as Tetra Pak Ltd.

“It is exciting to be back having a real marathon here in Lewa after two years of the virtual marathon. This year we have got over a thousand runners across the world participating in the marathon. It is so important because it’s not only a fantastic sporting occasion but also helps in raising funds to support the livelihood of the community around the conservancy. Since we started this initiative the fundraising has been very strong and we are looking forward to being able to support a wide range of beneficiaries across this country,” Said Charles Mayhew – CEO, TUSK TRUST

This year’s event attracted a wide array of talent from over 24 countries including 84-year-old John Ruwengo who took part in the 5km race.

Aside from giving a chance to emerging marathoners to compete on a professional level with seasoned runners, the marathon has been hailed for its sustainable impact on the community.