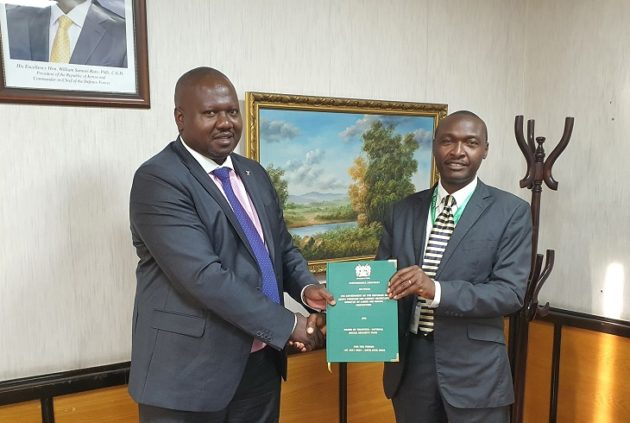 The outgoing NSSF CEO Anthony Omerikwa handing over the reins of the Fund today at NSSF Head Office in Nairobi to Acting CEO David Mwangangi who has been the NSSF Manager Ethics, Integrity and Records.{Photo/Courtesy}

This follows the exit of Antony Omerikwa from the helm of the agency.

“Today(Monday) is my last day as the CEO of NSSF and marks a momentous change of leadership in an institution that I have steered with dedication as a team leader for over seven years,” Omerikwa said in a statement.

Omerikwa joined NSSF in 2011 as a Manager and rose to the General Manager- Operations.

During Omerikwa’s tenure, the Fund’s net value of assets increased from Sh165billion to Sh295billion currently, this is in addition to an interest rate on member accounts of 10 per cent in the last financial year despite Covid-19 pandemic challenges.

He also safeguarded the Fund’s assets, acquiring back some of the assets that had illegally been obtained by third parties and reduction of the Funds Litigation Exposure significantly.In the same period, NSSF innovated and implemented the ‘Haba Haba’ informant sector.

“As I leave the Fund, I am a very proud Kenyan for all we achieved in transforming the institution,” he said.