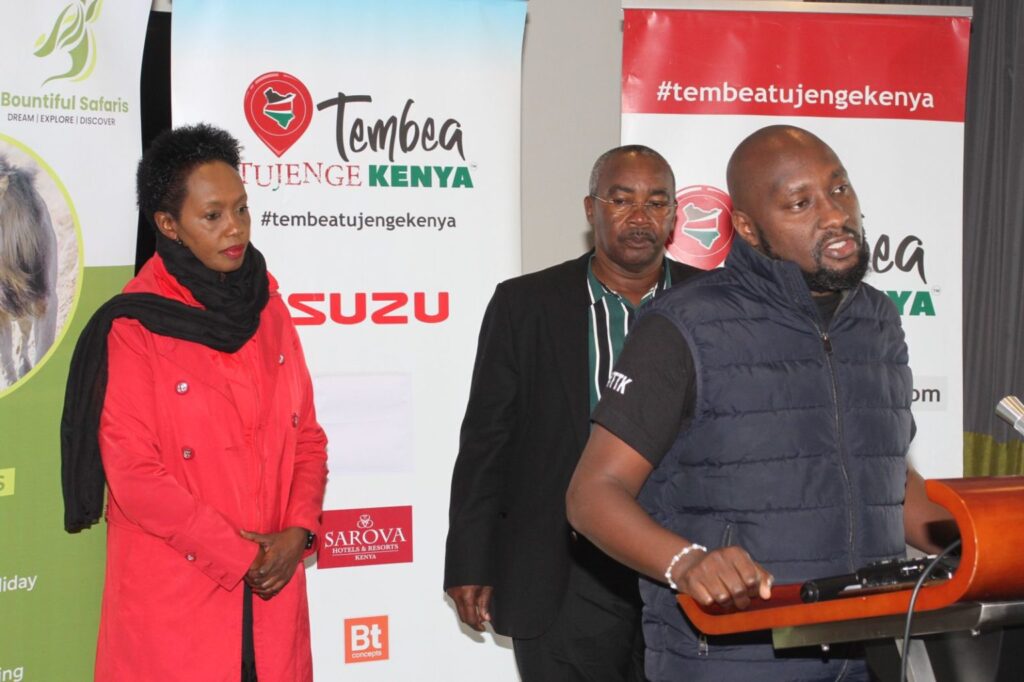 Tembea Tujenge Kenya CEO Andrew Kanyutu and the team addressing the media during the unveiling of the campaign to promote the region’s tourist destinations.The initiative targets about 150 million citizens within the East African region block.[Photo/Courtesy}

Tourism within the East African Community region will soon receive a shot in the arm after The ‘Tembea Tujenge’ Kenya team launches a campaign to promote the region’s tourist destinations.
The Tembea Tujenge Kenya campaigns initially focused on marketing Kenya as a tourist destination, but has since expanded and will now cover the East African region block, constituting seven member countries.
Tembea Tujenge Kenya CEO Andrew Kanyutu on Tuesday said it’s now time to spread its wings to the East African region, after recording exponential growth in domestic tourism.
Kanyutu said that the initiative targets about 150 million citizens within the East African region block.
“We are looking at the bigger picture where we can be able to sell Africa as a block,” Kanyutu said.
According to Kanyutu, the Tembea Tujenge Kenya campaign has been able to achieve a 60,000-bed conversion and saved over 40,000 jobs in the hospitality industry.“This is what we have directly tracked so you can imagine the ripple effect it has had indirectly,” he said.
Kanyutu also called upon the private sector to support the initiative, which has already received boost from Isuzu, Presidential Delivery Unit (PDU), Tourism fund and Safaricom.
“The objective is to ensure citizens build their own economy by touring their own countries,”he said.Chairman of Micro and Small and Medium Enterprises (MSMEs) James Mureu who also at the launch underscored the importance of the initiative in the region, saying it offers an opportuntiy to open up the region.
“I fully endorse this initiative and I think its about time we spread out to even the African region as a whole,” Muriu said.
The team is set to be handed the mantle by the East African Community (EAC) Secretary General Peter Mathuki in Arusha, Tanzania on 20th July 2022.
After being officially handed the mantle, the journey will start in Arusha, flow to Uganda to DRC Congo, Rwanda, Tanzania and Zanzibar, Burundi and eventually South Sudan.