Paul Russo has been appointed the company’s Group Chief Executive Officer (GCEO) by the KCB Group PLC Board effective as of 25 May.

Mr. Russo replaces Mr. Joshua Oigara who has been the GCEO for the last nine and a half
years, even though Joshua will be available for a period of time to support a smooth transition.
The appointment follows a competitively run selection process that kicked off earlier on in
March 2022.

“He is, therefore, the right person for the job and will take the Group to the next level in its growth ambitions to become the undisputed regional leader and drive much-needed business transformation for greater impact of economies and communities around us,” said KCB Group Chairman Andrew Wambari Kairu.

Adding that the Board is confident that he will carry on with the Group’s resolve to simplify the world of the stakeholders towards enabling the progress of the bank towards higher heights. Paul’s eligibility for the role ushers in a wealth of experience in banking, operational management,people management, strategy, and sharp business acumen. Being the current Managing Director of the National Bank of Kenya and the KCB Group Regional Business Director.

A conviction in his ability to deliver as he has over 20 years of work experience spanning executive and key roles from the Group Human Resources Director, KCB Group Plc. Holding an MBA from Strathmore University Business School and a Bachelor of Business Management from Moi University sets Mr. Russo above the average mark for the qualification in this managerial role.

Equivalently possessing a Senior Executive Program for Africa Certificate from Harvard Business School and a Higher Diploma in Human Resource Management from the Institute of Human Resource Management (Kenya) are some of the fields that evoke the proficiency entailed in the character held by Mr. Russo. Paul has consistently been a great leader with outstanding performance as proven through his delivery over the past 8 years while at KCB where he played a major role in the running of key strategic assignments within the Group business.

Even lately he was obligated with looking after the regional businesses (KCB’s businesses in Tanzania, Rwanda, Burundi, Uganda, and South Sudan as well as KCB Capital and KCB Bank Assurance Intermediary) and the National Bank of Kenya showing some of the qualities solemn in business growth.

The group chairman went on to remark that during his tenure at NBK, there was an execution of a significant turnaround, moving the previously loss-making business into profitability and on a trajectory for stronger growth in the future. The Board has commended Joshua for his service to the Group since joining in 2011. Stated that Joshua had a fantastic run as the Group CEO and MD having led the Group through its fastest growth as witnessed throughout the past decade.

“He has left a solid legacy for the Group across Africa and beyond that is dotted by the
transformation of millions of lives, enhanced financial inclusion across the region, digital banking innovations and has built a Group that is anchored on sustainable business practices,” added the Board Chairman.

In conclusion, offering the board’s remarks and a vote of thanks from the board appreciatingJoshua’s immense contributions and wishing him well in his future endeavors in whatsoever field he might opt to dive in. 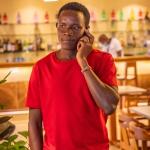