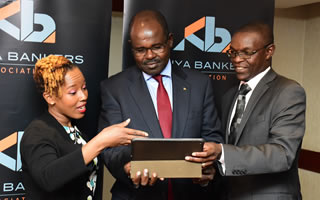 Nearly six out of every ten bank customers (58.5 percent) prefer Mobile Banking up from 52 per cent in 2020, followed by those that prefer Internet/Online Banking at 20.3 per cent.According to the Banking Industry Customer Satisfaction Survey (2021).

Majority of bank customers prefer mobile banking to the traditional brick and mortar services, reinforcing a sustained uptake of contactless banking solutions brought about by the Covid-19 pandemic, a new survey has revealed.

“The increase may be attributed to the challenges introduced by the pandemic and its containment measures, which have entrenched the use of contactless banking services,’’ the survey prepared by the Kenya Bankers Association(KBA) noted.

Customers who preferred the use of ATMs dropped to 9.8 per cent compared to 12 per cent in 2020.

Even so, the proportion of customers that continued to use bank branches remained unchanged, at seven percent, in both 2020 and 2021.

On customer support, most respondents (46.4 percent) preferred human-assisted services as the best channel for complaint resolution.

“The trend shows that while there is a general increase in preference for automated transactions, human contact is still largely preferred by bank clients in customer service support,” the survey noted.

The proportion of Customers with Disabilities remained largely unchanged in 2021 compared to 2020 with 3.4 per cent of respondents in 2021 indicating they had a disability compared to 3 per cent in 2020.

The survey also shows that most Kenyans are multi-banked, with at least 8 out of 10 bank customers (62 percent) having 2 to 3 bank accounts compared to the 2020 rate of 77 percent.

The findings attribute the decline to reduced economic activity in 2021 due to the pandemic, which triggered consolidations of funds by bank customers to reduce costs associated with maintaining many bank accounts.