KALPA kicked off an industrial strike on Saturday affecting thousands of passengers whose flights were either cancelled or postponed.[Photo/Citizen Digital}

The Kenya Airlines Pilot Association (KALPA) now says there has been no structure to enable deliberations between them and Kenya Airways(KQ) to facilitate a faster resolution to their ongoing industrial strike.

Speaking during the hearing of the contempt of Court application before Justice Anna Ngibuini Mwaure of the employment and labour relations court, KALPA stated that they have not had a face-to-face meeting to facilitate reaching an amicable solution.

The association through its lawyers, Peter Kimani and Levi Kariuki, asked the court to provide a mediator for the two parties to resolve the matter faster as they have received goodwill mediation in writing from the Law Society of Kenya (LSK), Central Organization of Trade Unions(COTU), Institute of Human Relations Manager and the Office of the Ombudsman.

KALPA further asked to be given seven days for the 10 applicants cited for contempt of Court to seek representation in order to be given a fair chance to respond to the order. 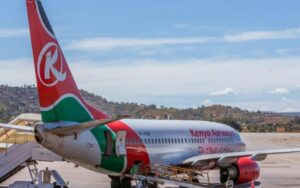 The respondent(KALPA)  has also noted that the order of contempt of Court is defective as one of the 11 applicants cited, Christine Kariuki, is an office administrator at the office of the respondent.

Kariuki obliged and requested the court to strike her out of the order and proceed with the remaining 10, arguing that serving the pilots individually would have been redundant as the respondent had stated that the specific pilots mentioned were not served individually.

Justice Anna ordered the parties to talk and have an agreement, even if it is partial, and submit a report to her by Tuesday 2:30pm.

Kenya Airways and the pilot association are entangled in a legal dispute as to whether the officials of the association can be punished for contempt of a court order.

KQ obtained an order issued on 31 October urging the officials of the association not to commence the intended industrial strike.

Justice James Lika on his part issued an order staying the notice issued by the association calling its members to commence the strike starting November 4.

The order according to KQ’s lawyer senior counsel John Ohaga was duly served upon the association officials and the same was disobeyed.

In ensuring compliance with the court order,KQ filed an application for contempt seeking to commit the officials to civil jail.

KALPA kicked off an industrial strike on Saturday affecting thousands of passengers whose flights were either cancelled or postponed.

The pilots accused the airline of pilot victimization and harassment as well as unilateral withdrawal of the staff provident fund, non-adherence to Kenya Civil Aviation Regulations, and leadership and governance challenges.

On Sunday KQ stated that it may be unable to meet its salary obligations in November if the pilots’ strike persists.