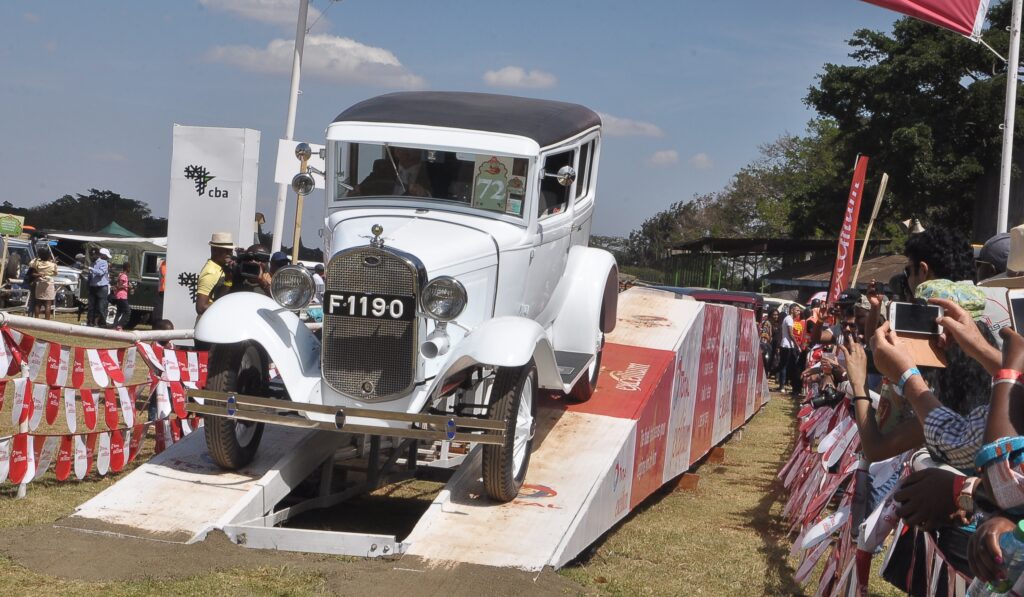 The oldest cars which will be the last to be inspected by the judges include Paras Shah’s 1928 Austin 7, the Ford Tudor and Ford Model A pick-up entered by Mike Duder and Joseph Kamau also made in 1928.[Photo/Bob Dewar PR Agency}

A full list of 70 cars and 40 motorcycles has been received for this year’s Golden Africa Concours featuring an amazing variety of vehicles at the Nairobi racecourse on Sunday, September 25 th starting from 9.00am.

The Concours d’Elegance is the classiest motorsport event on Kenya soil and the center piece is the judging of 70 classic and vintage cars and 40 motorcycles under the regulations approved by the Kenya Motor Sports Federation.Spectators will be thrilled by the “Golden Oldies” with competitors showcasing veteran, vintage and post vintage cars. The two Ford Model As entered by Anwar Fatehdin made in 1929 and 1931 will feature in this category together with Adrian Wroe’s Ford Model A which was the
overall winner in the previous event.

The oldest cars which will be the last to be inspected by the judges include Paras Shah’s 1928 Austin 7, the Ford Tudor and Ford Model A pick-up entered by Mike Duder and Joseph Kamau also made in 1928.
Sati Jabbal’s 1925 DKW and Dominique Antoine’s 1925 Triumph motorcycle are the oldest machines at this year’s Concours. Sati’s DKW was the highest placed bike in the last event and he will be defending it’s position amidst stiff competition from Peter Giraudo’s 1959 BSA Shooting Star and 1966 Triumph TR 6C which came second and third respectively.

The exciting rally cars are among entries which will grab the attention of spectators at the Nairobi Racecourse on September 25 th . These include the rare 1990 Lancia Delta Integrale entered by Tanzania enthusiast Navraaj Singh Hans, Aslam Khan’s 1968 Porsche 911 and the
Datsun PA 10 of Minti Motorsport made in 1980.

To spice up the mix is car enthusiast Kakooza Wazzir coming from Uganda for the seventh time to compete in the Concours d’Elegance. He will also be showing his rare 1996 Mitsuoka Viewt saloon and a Mitsuoka le-Seyde made in 1991. Edgar Katamujuna who is also a regular competitor from Uganda will compete in a 1985 Volkswagen Kombi in the class for utility cars made after 1970. For more than ten years, the Uganda Bikers Association members have added to the finesse and excitement of the Concours by riding their big bikes from Kampala to compete in the event.

Dressed in their black and red riding gear they are favourites with crowds who cheer them along the way before making a grand entry into Nairobi two days before the Concours. A team of 20 bikers will be taking part with the majority of their bikes in the Trail and Enduro categories

This year’s Concours is the 50 th and marks the Golden Jubilee of the annual series organized by the Alfa Romeo Owners Club. The objective is to give the owners of well-kept cars and motorcycles the opportunity to have them assessed by experienced officials. Competitors like to show their treasured machines to the enthusiastic crowd and to have the chance to win prizes in the 20 classes for all makes and types of cars, SUV’s, pick-ups and motorcycles.

There is also a Classic Sale for cars and bikes made 25, or more years ago. This enables the owners of unwanted machines to offer them for sale to the significant number of spectators who are interested in buying a car, or motorcycle for fun to use during weekends, or for preparing for future Concours events. The machines entered can be in any state ranging from sources of spare parts to good condition.

In addition, there will be motor trade stands in Auto Expo where the motor industry to showcase their new line of vehicles and products to the motorists. Another attraction will be the Heritage Collection stand which offers a display of old equipment and machinery including Roger Tanner’s old steam engines and an ancient TE 20 Massey Ferguson tractor owned by FMD.